Today for Cybersmart we have been learning all about 'netiquette' and what it means. We watched some videos as a class, and made a brainstorm on the whiteboard about appropriate ways to act online. We then learned to use a new tool "Venngage" to share our learning. We had a lot of fun experimenting with this site, and created some pretty cool and informative infographics. We made sure they all had a title, at least 3 tips, and stood out in order to capture the audience's attention.

What do you think? 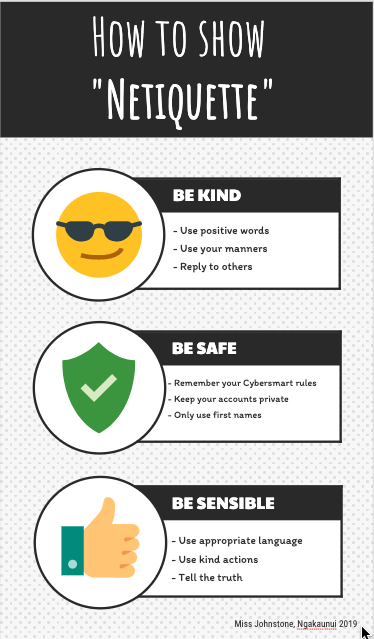 Email ThisBlogThis!Share to TwitterShare to FacebookShare to Pinterest
Labels: Cybersmart

Today in class we have been learning about Personal vs Private information and what we should be sharing to the world on our blog.
We all completed a google drawing, sorting through info about Miss Morgan's cute dog called Cooper. Lots of us disagreed about where the information went, but in the end we all decided on this:

Basketball with the Rams!

Some lucky Year 5 and 6 students have been lucky enough to be training with 2 of the Rams Basketball players for the last 2 Wednesday afternoons.
We have been learning lots of different skills and drills such as dribbling, different types of passing, tricks, listening to other players, and many fun games!
We have been having so much fun with Emmett and Cam. Some of us have been attending the games and we were lucky to receive some free tickets to the big game vs Southland Sharks at Horncastle arena this Friday! We are so excited and can't wait to cheer on our favourite team.

Our Behaviour Expectation Week One

This week our focus for behaviour is 'Before School'
As a class we discussed everything we could do to ensure we are ready to begin our school day. Most of our ideas are on the image below
We then completed an activity to show some of the activities we could do when the school bell rings at 8.30. A lot of us wanted to go on our devices during this time however, we still need to build some trust before we can do this. We came up with some creative ideas. But here are Miss Johnstone's below:

Pride in Our Achievements

This week our value is Make Someone's Day and we are looking at Pride in our Achievements.
This is a good chance to reflect on all of the amazing things we have achieved this term.

Te Ropu Ngakaunui and Te Ropu Maia have been learning the song My Hometown by Jason Gunn for assembly. We thought we would contact Jason and see if he wanted to come down and watch our performance. Unfortunately he was at the vigil at Hagley Park the same time assembly was on! This was ok though because he sent us a video to share at assembly instead.. click on the pic below for a link to our special video. 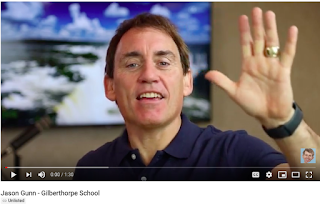 Jason came and visited us at school on Tuesday Morning. He walked in the door and said "Can I ask you a silly question? Would you guys like to be on the radio??!"
We performed our song and it was recorded to be put on More FM later that day. We did a fantastic job and brought Jason close to tears. He was with us for 45 minutes and talked to us all about what we want to be when we grow up. We had such a great time, what a cool guys!

We loved hearing ourselves on the radio, thanks for coming Jason!

Check out our descriptions of ourselves.

Who is visiting this blog?